On one of the job forums that I frequent for promo gigs, a fellow promo person posted a job looking for some ladies to work at a big trade show in Las Vegas: 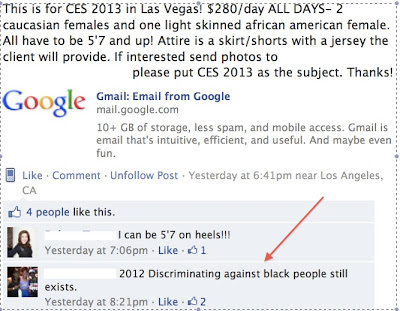 My immediate thought was, “Too bad I’ll be in Hawaii at the time. I would love to go to CES this year.” Then I started to read some of the thread’s comments. Notice the red arrow

Its so annoying when people are quick to complain about discrimination without good reason. Let’s get real. This is a modeling job not an equal opportunity employer! Maybe the client wanted to add extra models and they already had 4 black girls working but needed one more, maybe not. If you saw a white woman with cornrows in a Just For Me (hair relaxer) commercial you wouldn’t think that was odd? Do you think Victoria Secret should start hiring short pimple ridden non-waxed models to walk the runway in a bikini and angel wings in the name of ending discrimination? Shut Up. Do you know how many emails I get looking for size 4 blondes with blue eyes to give out free samples of St. Paulie Girl beer? I don’t take it personally because I'm black. I realize that my look doesn’t cater to their demographic. That it’s not racism, it’s marketing 101.

Now if she had founded her argument on the fact that dark skinned black women are portrayed as exotic creatures of the jungle or desert with short natural hair like Alex Wek vs. images of lighter skinned black women who look racially ambiguous with light eyes, freckles, relaxed straight hair and Caucasian features like Liya Kebede or Jourdan Dunn I might have taken her comment more seriously.

*To be fair, Liya’s features are typical of Ethopians ,where she is from. However, they are in line with the mainstream standards of beauty and therefore extremely marketable to various races. My point is, if you’re not getting booked for modeling jobs, either find a new agency that can get you work, start your own modeling agency or stop modeling. How about be vocal and vigilant (angry is optional) against real acts of racism?


Standards of Beauty
If I see one more makeup column in a fashion magazine that tries to sell me the best lipstick for my dark skin tone while showing an accompanying picture of Kerry Washington I will set my magazine on fire! While gorgeous (she's come a long way from Save the Last Dance), Miss Washington is not dark skinned. I guess it depends on who you're talking to though. It also burns my grits that people seem to get lighter as they get more famous. I mean I understand getting veneers, having long flowing weave and wearing red bottoms to the grocery store but why do you have to lighten your skin? The public doesn't want to see ugly stars but it's not like being dark make you any less credible or talented. In my opinion as Beyonce has gotten closer to looking like a white woman, her music has gotten worse. (Not saying that the these two things are related in anyway, just an observation).

In high school I had a mixed friend (half white, half black, light-skinned with green eyes) named Jaime. One day during our study period in Mrs. Tingley’s World History class my friends and I were talking about playing tennis when she said, “Don’t you want to stay out of the sun? You’re the darkest person in this room.” I didn't even know how to respond to what she had said. I just sat there stunned with my history book in my lap. What's wrong with being dark? Until that moment I had really never thought of my skin color being seen as less attractive than others. I was appalled that someone I thought was my friend could even think that way. Since then I have grown to love my skin color more and more, especially when I'm bronzed from the summer sun. And now that I think about it, we’ll see how our skin compares 25 years from now. I know you've heard black don’t crack but did you know biracial needs a facial?

Even now, 10 years later I hear people of color say, "Ooh I'm trying to stay inside, I'm way too dark" and "I can't wait until winter."  It's a shame because there are so many beautiful shades of skin. From Gwen Stefani's pale ivory to Djimon Hounsou's dark chocolate, they're all great. On second thought, if you are purple go back to where you came from Barney.

Stereotypes
·         No body is perfect though. I can't even lie, there have been times when I let something slip that I would normally only say around my black friends or when I'm alone. For example when a bad driver is driving so slow that I miss the light and I yell, "Get out of the way Mei-Ling!” I know every bad driver isn't an Asian woman but still, a lot of them are. Am I right?

“    "Why are there so many fat black women who don’t know who fathered their child?” Obviously there are fat, single mothers in every race. Many of the black one's just happen to go on the Maury Povich show.

“    Eating at a white friends house and and knowing what the snacks will be every time. You know white people love white wine and cheese! I have tons of white friends that have confirmed this, ha.
"Why are black people so loud?"I have to admit that there are some loud ass black people on public transportation. I hate it when the non blacks look at me like, "tell your cousin to be quiet." Even though I'm talkative I'm very soft spoken. Just depends on the person.
Another thing: When Asian storeowners follow you around their shop. There may be various reasons why they do this. Maybe they are trying to be helpful or maybe they are making sure you don’t steal anything. To be fair I have never asked, “Why are you following me?”

Racially Insensitive
As told to me by my Grandmother, “I don’t hate Mexican’s. I just don’t shop at their supermarkets. How could I hate them when I always talk with Julio’s mom downstairs?” Btw, Julio’s family was from El Salvador. I'm going to let that one pass because she's in her 70's and grew up in a different time. Oooh the stories I could tell you about her. I think one day I will...

Similarly I had a (white) guy friend call me one night just to talk. Everything was cool until he asked if I was eating collard greens. WTF? Even if you’re joking around, that is NOT okay. Unless of course you have the type of relationship where you throw around racial epithets at each other like ping pong balls and both find it equally hilarious. We do not have that type of relationship. We have the kind where we get drunk and make out which I like a lot better.

Honesty everyone has their moments but that doesn’t necessarily make them a racist. I absolutely love Indian people, I eat Indian food all the time! j/k  ^_~