Welcome to my African American Home

My sophomore year in college, I lived in a dorm where each American student roomed with an International student. It was like living in a bunch of different countries at once. I was paired with Priscilla, a Brazilian exchange student from Rio de Janeiro and boooooooyyyy we had so much fun together. She taught me Portuguese and I taught her English slang. She made me feijoada & pao de queijo and I made her yams and macaroni and cheese on Thanksgiving. We’d dance to Brazilian Pop music during study breaks and go to parties at Duke and UNC with the Ecuadorian kids.

During this time in my life I was pretty popular and my room was like the United Nations hangout spot. The Japanese & Chinese students were polite but mostly kept to themselves. However, I regularly got drunk with the Scandinavian & Irish kids, had movie nights with my German friends, and dated an English guy.

Priscilla’s culture was similar to mine in many ways but many of my other friends' cultures that year were not. Outside of music and movies sometimes I was the first African American person that they had ever interacted with or perhaps even called a friend. In many ways I was like a Black Brand Ambassador, dispelling their preconceived notions of Black people. Years later, when I dated a White guy that wasn't versed in my Blackness, I found myself in that same Black Ambassador role.

When I first started dating JC* my Grandmother had a hard time processing his White American background. Being born and raised in Brooklyn she was used to ethnic white people. 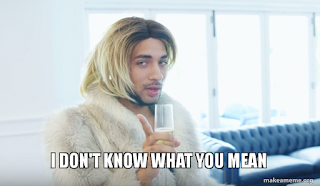 Is he Italian?
No.
Irish?
No. Just Caucasian.
What do you mean just Caucasian? Is he Jewish?

I had to break it down for her.

My boyfriend was not white like Jon B, Eminem or Tommy from Power. It would take a while before my family would be comfortable inviting him to the cookout. He was a Bernie Sanders supporting, sweatshirt with flip flops in the winter wearing, doesn't close the living room blinds at night and let's his dog lick him in the face^ type of white guy. To be fair I don't know what Jon B, Eminem or the actor that plays Tommy enjoy doing in their free time, but I highly doubt it's listening to music primarily consisting of banjos. I hated those car rides.

I would explain facets of Blackness to JC and I kinda got a kick out of it. Every month we dated was like Black History month. I would tell him things and he simply would not believe me. For example he thought I was joking when I told him black people aren't really into extreme sports. He would randomly ask Black people about it when he'd get the chance. He asked my best friend one night and she said, "I cant speak for black people every where but I'm going to go ahead and say no."

Conversations like this were commonplace between us. JC played hockey and since I had never been to a hockey game I was excited to go to his championship tournament. Before his division played, the teenage division was up and I noticed there was one black kid playing.

You mean black people don’t you?

Yeah. I've counted maybe 4 Black people at this ice rink, me included, and 2 were janitors. In addition to mountain climbing, PCP and serial killing, we don't typically play hockey.

Name one (I had to stop myself from easily rattling off the names of White serial killers).

He was African, not African American. We don't even eat the same food or have the same health problems.

African Americans are going to come after the person who came after them. We're not about to stalk you for 3 weeks, meet you on the jogging trail and cut you into pieces for stew simply based on the fact that you have brown shoulder length hair.

Well you’re right that there aren’t a lot of Black hockey players.

I bet he was raised by white people too.

And because I'm petty at times, when the game was over and the players started coming off the ice I went over to the black kid.

Hey you were really good out there! How long have you been playing?

At this moment his clearly Canadian Caucasian parents walk up and congratulate him on the win. I look at JC like...

Speaking of Caucasian parents, when I met JC's, they welcomed me into their home, offered me snacks and asked if I was lactose intolerant.

It was funny to me because they seemed fascinated that I didn't drink milk with each meal. My stomach hurts just thinking about it.

Apparently JC had relayed a conversation we had about most minorities being lactose intolerant and so they asked me if my family ate cheese.

The short answer: Yes, but we're going to hate ourselves afterwards. The long answer is my family probably isn't going to offer you cheese or any other food if you come over. Unless the reason for your visit is specifically dinner or a cookout, they will offer you something to drink. Besides, you're not going to just pop up unannounced to a Black person's home and expect them to answer the door anyway.

For the record I really liked his parents. They were very sweet and down to earth people whom I felt wouldn't mind having mixed grandbabies one day. Obviously I really liked JC too. He sincerely liked me as a person and not in a weird "I've never been with a chocolate girl" fetish type of way. He thought my natural hair was pretty, he liked that I smelled like Cocoa Butter. But a big part of what made me like him was the fact that we could openly discuss our differences and learn from them.

Honestly I wonder how is it even possible to go to school, get a job and live in a society with people that are different than you, without knowing anything about them? Get out of your bubble.

I guess the sad truth is that we live in two different worlds. I live in JC's world all the time but only after we started dating did he bother getting to know about mine. It didn't work out between us, but ironically it wasn't because of his lack of cultural awareness, it was bad timing.

When Priscilla first came to North Carolina she gifted me with a book about Rio. We would look at it sometimes and she'd tell me stories about each of the places inside. Before she left to go back to Brazil at the end of our Sophomore year, I gifted her with a book about North Carolina. We were both able to take what we had learned about each other back home and share those experiences with others. If only we could do that right here in the United States.


*Names have been changed to protect the identity of my ex boyfriend. I also had a huge crush on JC from Nsync growing up and so this was my chance to live out my teenage fantasy.
^ I'm not stereotyping White people. These are all things that JC actually did
Posted by Jolie at 6:57 PM