If French Montana was walking down the street in Marrakesh I would pay him no attention. Not because he's unattractive but because he would blend in. Most of the men we've interacted with in Morroco, remind me of a tall, short, skinny, pudgy or middle aged version of him.

Additionally, the men in Morroco have been very kind and helpful, but consistently aggressive. Whether they're trying to negotiate business deals or pour mint tea; They have no chill.
For the entire 8 days we toured this captivating country the men basically spit Drake lyrics at us...

Coming from the United States, where whiteness is "rightness", I must say that it feels extremely nice to be lauded for your beauty as a black person.

Even the manager of one of the hotels we stayed at said we'd easily fetch a one hundred camel dowry. This compliment seems pretty impressive when you don't have anything to compare that unit of measurement to. Are 100 camels better than say, 100 instagram likes? 100 free Uber rides? 101 Dalmatians? For me though, the most impressive part of our trip was our 3 day excursion into the desert.

On the first day we wove our way through the Atlas Mountains and our driver was wildin'. He was dressed like Bruno Mars in a fitted navy blue suit and fedora, but facially he could still pass for French Montana's older brother. He kept passing cars on the two lane mountain roads while speeding around hairpin turns.

I wanted to say, "Excuse me, Mr. Bruno Montana? Sir, we are on the side of a mutha fucking mountain," but instead I just put my seat belt on, closed my eyes and prayed for our safe deliverance.


We do a guided tour of Ait Ben-Haddou, where Lawrence of Arabia & Game of Thrones were filmed, have a group dinner & spend the night in a hotel. The second day we walk through a Berber village. The villagers farm figs and grapes and show us how they dye camel and sheep fur with cumin, saffron and indigo to weave handwoven carpets. They also except plastic money (their words not mine) and ship FedEx if you're interested.


That afternoon our tour group arrives at the Sahara Desert. We file into a building at the edge of massive sand dunes and a man dressed in a traditional Berber tunic brings out Morrocan tea for everyone. I ask the tea guy, Karim*, some vital questions.

Whats for dinner? (At this point I'm really craving a juicy 5 guys cheeseburger, as I had been eating shish kabobs & tajines for the last 4 days. Karim said it was going to be Chicken Tajine and bread)

Where are we gonna pee? (He informs us that the camp has an outhouse with a squat toilet and no running water)

Do ya'll have wifi in the desert? (There would be no wifi and no water either so he tells us to bring our own bottled water)

We were going to be roughing it.

As we're preparing to get on our camels Karim brings my paperwork over and asks if I have whatsapp.

Outer me was like, "Oh he probably just wants to practice English." 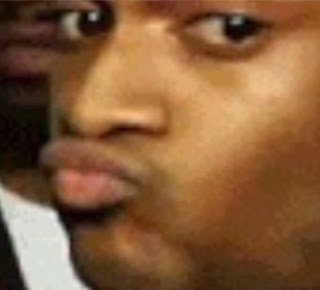 I'm pretty naive though so I give him my whatsapp anyway, hop on my camel and keep it moving with the rest of the group.

Now I don't want to tell you how to live your life, but if you have never ridden a camel for an hour and a half through the desert, it is not a necessary life goal to achieve.

Riding a camel hurts ya'll. Your neck, your back, your poonani and your crack. The entire ride I felt like a Republican with unlocked car doors at a stoplight next to a car full of minorities: Uncomfortable.

I couldn't help but wonder, how did Jafar find the Cave of Wonders? If I had gotten separated from the group & lost in the desert, there was a good chance I would literally become a line from the Bible a Beyoncé song; From ashes to ashes, dust to this chick. 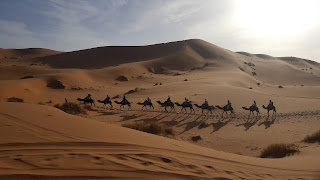 After snapping multiple selfies and losing my scarf in middle of the desert from atop my camel, we finally stop to watch the sunset. 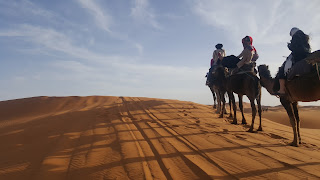 The view was stunning. We could see the border of Algeria to the east, over the peaks of the untouched sand dunes.

The only working out I've done lately has been working out my issues, so I'm catching my breath after trudging through the sand when I get a phone call from a 212 number.

I don't answer it because Verizon charges $2.99/minute for international phone calls. Instead, I grit my teeth & pay 50 cents to reply by text.

Then I realize it's not a 212 number from New York, but that 212 is the country code for Morocco.

It's Karim, the tea guy.

We get to the camp, sit down to dinner and Karim shows up in full Berber regalia. In addition to his bright blue tunic, intricately woven with golden fibers, he is donning a turban the size of a Thanksgiving turkey serving platter. Its made with 2 brightly colored scarves instead of just one like the other desert guides. Either he is kind of a big deal or he is seriously peacocking.

After dinner the desert guides build a bonfire, and start playing and singing traditional Morrocan music. When Karim isn't whispering about me to his coworker, who looks like French Montana's first cousin, he stares at me while he plays the cymbals like I'm the last sip of water in the desert.

Meg and I are exhausted. We've already been up for over 12 hours and tomorrow morning everyone is supposed to watch the sunrise. he desert guides say it's not good to go to sleep on a full stomach and urge the group to climb one more dune to see the next city over by moonlight.

But this is no regular dune. It is the Starbucks venti of all dunes. It's legit 900 meters to the top. We start the uphill trek and I'm in front but want to tap out early. People keep passing me until I'm at the very end of the group and then Karim magically appears.

I really don't want to because I can tell he likes me and I don't want to lead him on, but I am seriously struggling to keep up. I reluctantly take his hand.

Eventually we catch up to a group of Chinese tourists that are resting from the climb. We stop just before we reach them and Karim says

I want to keep going but I'm tired as hell. The Chinese people are only about 15ft away, close enough to hear my screams if anything goes down. *Whispers* but in all honesty I don't know if they'd help me. 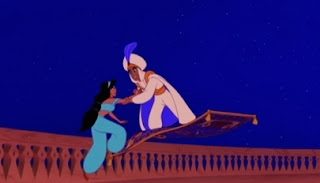 I swear this dude whips out a carpet from Allah knows where and smooths it out over the sand.
It was almost like he had planned this whole thing.

Did you get the messages I sent you?

I lie and say no.

Normally I'm the concierge and don't come out to camp, but I couldn't stop thinking about you. I came to get to know you.

You really didn't have to do that Karim.

I walked 1.5 hrs through the desert just to see you and talk face to face.

I wonder if he found my scarf? I thought to myself.

Karim keeps going on and on about how he never got married because he's been waiting his whole life for a black woman. I kinda want to remind him that he was born and raised in Africa. Every woman he grew up with is black, but instead I ask,

How old are you?

31. Every year I wait for a black woman to come to the desert camp. Last year a black man came so I was still disappointed. You're the first.

I do like to think of myself as a trailblazer.

He moves his hand close to my face and says, Here in Morroco we call your hair Rasta hair.

That's interesting. I back my face away from his hand. In America we call it Yaki 1b/350.

Then he starts talking about us getting married. I can move to Morroco or he can move to NY. (He saw that's where I was born on my passport). He comes from a family of 10 children, well 9 now, because his sister just got married. He wants to know how many kids I want to have.

Now Karim isn't an ugly dude. He doesn't even look like an immediate member of French Montana's family. If the circumstances were different (ie. I was desperate and ignorant to the fact that many men prey on foreign women vacationing in their country in hopes to get a green card) I might have given him a chance. But my life isn't a Disney movie. I can't instantly fall in love with a stranger and move to a foreign country. I am not Pocahontas.

That's not normal. The purpose of life is to find a mate, love each other and make each other happy. Happy wife, happy life

He shrugs. I don't know why. Allah made my heart that way. But I can also tell that Allah made you a good person.

I get teary eyed but do my best to hold it together. A little over a year ago I was in a long term relationship with someone whom I wanted to tell me all the things Karim was telling me right now. But he never did.

It's so dark outside that we can't see each other's faces. The only light is from the moon and the stars and I have to admit it is a beautiful night. I hear a desert beetle scuttle by and I tense up.

Karim scoots closer to me on the magic carpet and breaks the silence, "I only have one heart and I want to give it to you."

That line right there almost got me ya'll.

But my mama ain't raise no fool.

Karim may be a lot of things, none of which I'm familiar with because we just met 4 hours ago, but in this moment he has transformed from Aladdin into Prince Ali baba and he's showing me a whole new world of compliments. It's like Drake is serenading me by moonlight, kicking game like judo.

How many days will it take you to forget me?, He whispers. I will always keep thinking of you.

How many more women will you say this to this week, I think. But I jokingly reply, I will never forget this night.

Then I tell him I'm tired and want to go back to the camp and he says ok but suggests we hold hands.

I bury my hands in my coat pockets and while we're walking down the sand dune Karim tells me to never give my heart to someone who won't give their's back.

Maybe French Montana's 3rd cousin, twice removed isn't as naive as I thought he was.

As we reach the camp, I politely tell Karim good night and duck into my tent. Meg is inside preparing for bed and asks where I've been.
I tell her the whole story as I pull on my sweat pants and fuzzy socks.

"Wow that is creepy and intense," she says. "But now you can never date a guy who won't cross a desert for you."

*names have been changed
Posted by Jolie at 7:29 PM