When we left off with Part I of Deux  Degrees of Separation, Phil had just texted me photos of himself looking crazy as ever and proud of it too. Let me tell you, his weird phone call followed by the unbelievably unsexy photos left me feeling a mix of emotions and plagued with some questions.


- This guy can not be serious. Did he really think I would find these pics attractive? Out of all the photos in the world that he probably could have sent he chose these?


- How did he get my number because I sure as hell didn’t give it to him. Did he get it from Facebook? (Checked Facebook and my number is not listed on there). Is it written on a bathroom stall of club in downtown Chicago? (Unlikely since I don’t frequent those places or hang out with people that do).


- Who the FUCK gave this guy my number?!


- At least I didn’t get any dick photos. Those are the worse.

For about a week straight Phil would call and text me like mad.  It was surely my fault for even entertaining him on that first phone call to begin with. I knew not to answer his number and I could block his text messages (avoiding possible dick texts) but then he started to call from other people’s numbers. As I mentioned in Part I, I always answer a call, even from numbers I don’t know because it could be a gig. Imagine my surprise/disgust/annoyance when it would be Phil. Eventually I took the chance that if it was a gig that really wanted me, they would leave a message or send an email. Otherwise they wouldn’t’ get a return call.

I guess I was dealing with a master of phone tag because Phil graduated from random phone numbers to the dreaded UNKNOWN phone number. If you didn’t know before, just know from my experience that whoever it is on the other end of an unknown phone call, it’s probably someone you don’t want to talk to.  Most likely it’s a bill collector, the IRS or a company offering you a free cruise if you just sit and listen to their hour-long timeshare presentation. However there is the small chance that it could be an emergency or even the Publisher’s Clearing House calling to tell you that you’ve won a hefty sum of money. I mean they don’t just make those commercials up. They are real! So you HAVE to pick up the phone just in case, and oh shit. It’s Phil again. 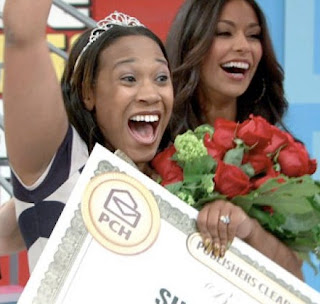 I consider myself a nice person and I didn’t want to lead this guy on but some people just don’t get it even after you’ve avoided talking to them for weeks. Lil suggested that I tell him I was seeing someone (which is the truth) and that it would be disrespectful for me to continue talking to him. Phil took this bit of information surprisingly well. He told me, “You’re a 4 star lady, of course you have a man. Why wouldn’t you? I get it but we could still harmlessly meet up for coffee.”

I don’t know what it is, but if you tell a guy you have a boyfriend, it only makes them want you more.
I’m not being conceited, it's a proven a law of the universe. Pretty girls know what I’m talking about.

Eventually the phone calls did cease and I was a better person for it too.  I could answer my phone without fear of having to chat with the phone stalker Phil had become over the previous weeks.
Well imagine my surprise when I get up one morning and see a Google Chat message from Lil saying to CALL HER IMMEDIATELY. The previous night I had asked her to go with me to a fashion show I was invited to by a mutual friend (proof right there that I’m a warehouse event party kind a girl, not a downtown Chicago club scene type of girl). She couldn’t go because she had a date. Lil has never been one to kiss-n-tell, so she just gave me some superficial details.

She met this guy while she was coming out of the supermarket the other day. He seemed really excited to see her at first and approached her like an old friend.

“Hey! How are you?!” Supermarket guy said happily.

They went out for coffee and he told her all about where he was from, what he did for a living and that he lived in the same neighborhood.  Lil said after she got home that evening something just seemed off about the whole encounter. And then he started repeatedly text messaging and calling her for the next week.  Lil isn’t into clingy guys (who is?) so the whole thing rubbed her the wrong way.

Then something Supermarket guy had said during their outing sparked her memory. She picked up her phone and thumbed through the text messages that I had sent her a month prior. There it was, Phil’s unattractive photos, looking gangly and wild haired as ever. He had even mentioned being Creole on their date!

It’s winter in Chicago, so when they met for the first time in person, he had on a heavy coat and a hat that covered up that crazy hair of his. He wasn’t the man of her dreams looks wise, but he was nice and chatty, so why not get a drink together? After all if someone offers, most likely they’re paying ^_~

In the end, Lil decided that they wouldn’t meet up again. He was way too clingy, texting and calling her all the damn time. The weird thing is that he never once mentioned that he knew her, or at least thought he knew her. He never said, hey I have a picture of you in my phone that you sent me a month ago from a different phone number when you called yourself TK. Why aren’t you calling yourself that anymore? How many phone numbers do you have?

Maybe its normal to have multiple phone numbers since he called me from at least 3 different area codes. Maybe he was that hard up for love and/or companionship that he didn’t bother to ask questions or maybe he just didn’t care. Again not trying to sound like, “one of those girls we all hate” but all of my friends are Pretty good looking. I don’t hang out with ugly bitches so it goes without saying that Lil is a looker. He had hit the hot girl jackpot! Moral of the story is: return to using a landline and make sure the number is an unlisted one.
Posted by Jolie at 9:00 AM