*Just a word of caution, this post is a little racy*
A couple of nights ago I was in Uptown, a Chicago neighborhood with reasonable rents, a few good restaurants and nice people if you stay away from the Lawrence red line stop. While there I met up with some friends at Bar on Buena. Actually “friends” is probably a strong word. I should say that that I met up with a group people that I occasionally work with and don’t hate enough to not go out with. After a few drinks the conversation turned to relationships.

There are certain topics of discussion that are either fair game or off limits depending on if it’s a gang of guys, a harem of girls or co-ed frat party. Honestly I don’t know what guys talk about when they get together. Perhaps it's Beyonce, interior decorating and 401K's or if it's a group of straight guys I would assume it's a combination of sports, SNL and T and A? I'm pretty sure both gay and straight guys talk about Men's Health magazine.

Usually when I’m hanging out with my girl friends we talk about guys (who we’re doing, who we want to be doing, who we did) or bitches we hate. Most often though we talk about random everyday stuff, like recipes, skin care and in my case how long it took me to conquer the last level of Super Mario Galaxy 2. Let me tell you, that shit is hard. Those Japanese game developers deserve a Nobel Peace prize for their imagination and engineering. Who else could have thought up two mushroom eating Italian brothers with connections to royalty (Princess Peach) whose best friend is a dinosaur? Unless I had some mushrooms too, not this girl.

Anyway, I know some ladies like to be the center of attention and I get it, I want to be noticed too. But there is a line that you’re not supposed to cross if both ladies and gents are present. I’m not even talking about openly discussing cramping, breast tenderness and discharge. That’s common sense.  But I cannot stand when I’m in a mixed group of men and woman and a chick just has to mention how much she loves to give blow jobs. What kind of childhood did you have?

Really, I think I've heard it all. From statements like “I always swallow because semen tastes so good” Was your mom a bad cook? 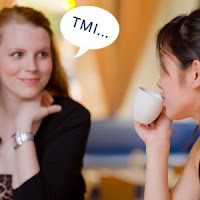 To “It’s cold in here and my nipples are so hard right now, does anybody have any lotion?” Did your parents only let you watch TV shows on Cinemax?

The women will sit there looking disgusted while the guys are like, “Is that so?”

What I want to know is, "Who are you trying to impress?" Skank.

Obviously not the women at the table because we are all horrified that you would say something like that. Maybe you’re trying to entice a guy or flirt with someone’s boyfriend? I’m not sure how guys feel when girls say things like, “I never need lube because I’m always so moist and ready to go,” but I am really hoping some guy will read this and give me some insight. In my mind:

Maybe I'm an old fashioned prude. If guys do dig us talking about our lady parts, the next time we go out I’ll mention that my pores are sooooo small whenever I get out of the shower. Not enough?

But you should know, the girls in the group will all hate you forever, probably talk about you behind your back and make sure not to invite you out to things if their boyfriends are going to be around. You will probably marry some guy that fell in love with you when you told him the color of your areolas on the first date and you’re going to end up with no bridesmaids and you deserve it.

I’m not trying to tell people how to live, I’m just saying don’t be that girl.
Posted by Jolie at 2:29 AM